Your browser does not support the Unity Web Player. Want to save the game for later? Add it to a collection.

You are a professional wrestler. Act like one. Don't let the audience get bored!
Z - Punch
X - React to Hit

This is the story of El Macho "The Monster" de la Caliente, or rather, Vee Cristina de la Caliente. He was named Cristina, because he was born to poor parents who wanted a beautiful daughter, but instead got an ugly son. He was so ugly, he was already born with a mustache.

Papa Papi: What an ugly son!

Mama Mami: I know. If only we had a beautiful daughter, who could be married off to the impossibly rich and handsome Illustrado!

Rich and Handsome Illustrado: I'm so rich I must regularly check my bank vault for swimming ducks.

But his parents could only dream of a life that existed only in soap operas. To win their love, Cristina had to think big.

El Macho: I know I can win their love! I must simply buy it with a lot of money! But how?!

And that was when Cristina saw on his tv, a commercial for wrestling in the land of Los Baldos de Agila!

El Macho: That's it! With my disproportionate muscles and a mask to hide my face, I will wrestle as a Luchador, and win my parent's love!

And so, Cristina set off to the land of Los Baldos de Agila, to make honest money through dishonest sport!

Can you win every match without boring the audience? 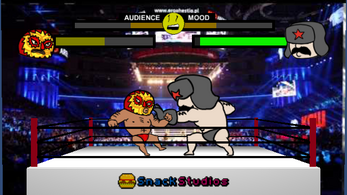